Lowcountry life here on the South Carolina coast wouldn’t be the same without our extremely entertaining and mesmerizing Brown Pelicans.

When we think of Low Country beaches, we can often picture a beautiful sunset over the water. Gentle waves crashing along the beautiful sandy shores, with large majestic birds skimming the crest of waves. Those amazing creatures surfing the air currents off the waves are the amazing Brown Pelicans. They are pretty much-flying dinosaurs who have graced this earth for over 30 million years. They are extremely entertaining to watch as they are both hilarious and mesmerizing.

Brown Pelicans, Pelecanus occidentalis, are large stocky birds with long thin necks and a stretchy throat pouch. They have long bow-shaped wings that can reach up to 6 feet in length. They can reach a height of 4 feet tall.  Brown pelicans’ bodies are grey-brown in color. Juveniles have a pale white belly that darkens as they get older. You can tell the maturity of a brown pelican by the coloring of their head. The youngest pelicans will have grey-brown heads. As they reach their “teen” years they will develop a white head that will eventually turn golden yellow as they reach full maturity. You can tell if a brown pelican is ready for reproduction if you pay close attention to its neck coloring. The back and sides of the neck will turn a dark reddish-brown when ready for nesting. 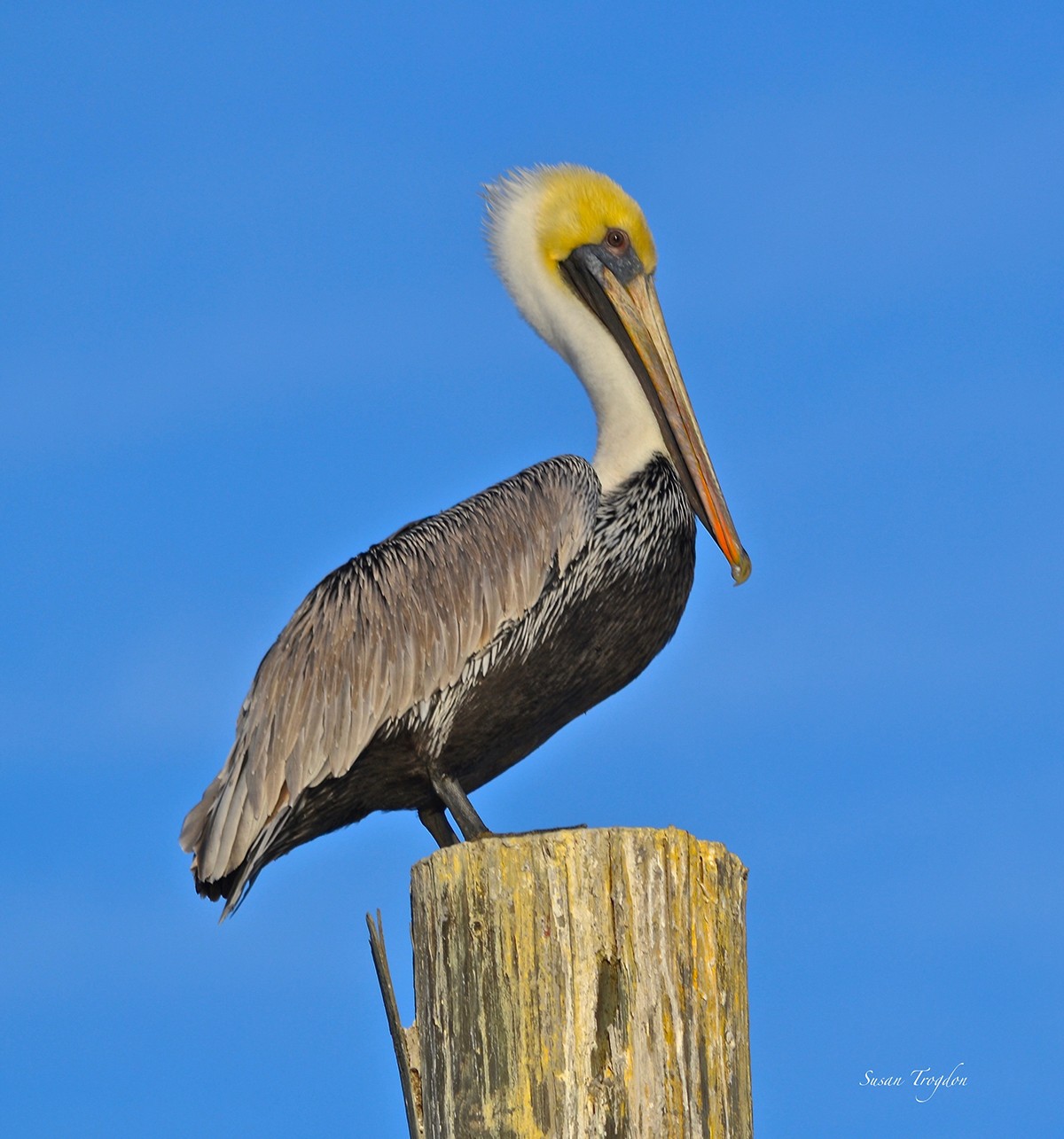 These large birds can be found on both the East and West coast. On our Eastern seaboard, you can find them most commonly in estuaries and coastal habitats. They are rarely found more than twenty miles away from the shoreline. Pelicans are known to breed from Maryland all the way to Venezuela. During the day you can see them hanging out on local shell banks, sea walls, jetties, groins or just floating on the surface of local waters. They used to spend a lot more time hanging out on local beaches, but due to the increase of humans, they have moved on from these areas. They nest and roost at night on sandbars or islands that were specifically created for them by the Army Corps of Engineers.

Watching these birds hunt for food is surely a spectacle! Pelicans prefer to eat small schooling fish, such as pogeys, menhaden, mullet, and anchovies. Pelicans are able to spot these schooling fish on the surface of the water from up to 65ft in the air. They will then dive down, face first, to scoop the fish and about 2.5 gallons of water into their expandable lower beak. Pelicans will tuck their heads and slightly rotate to the left in order to protect their trachea and esophagus. They also have air sacs beneath their skin that are inflated during the downward dive that protect their other internal organs. Pelicans have been known to eat invertebrates and prawns. They will also scavenge and steal food from others.  As pelicans age, the impacts of feeding over a lifetime takes a toll on their eyesight. It is common to see older pelicans hanging around marinas and piers begging for fish. These birds can eventually go blind, which can lead to starvation.

Pelicans nest in our area from March through December. They nest in colonies on barrier islands that are isolated from people. There are many areas that have been deemed sanctuaries for their breeding as well as some island that have literally been built specifically for the Pelicans to breed. Males will pick out a sufficient nesting spot and protect the area for up to 3 weeks while he performs head sways to attract a female. The female will then build the nest and breeding commences. They will lay 2-4 eggs once a season. Pelicans will incubate the eggs, keeping them warm with the skin of their feet for up to 35 days. Newly hatched chicks will stay with the parents at the nest sight for up to 80 days before heading out on their own. They will be ready to breed between the ages of 3-5 years old. The oldest known Brown Pelican was recorded to be 43 years old.

Pelicans have been protected along our South Carolina coast since the 1960’s. DDT played a large role in decimating their population. Essentially DDT was used as a pesticide on crops. This poison then entered the waterways through runoff water and was consumed by fish, which in turn were consumed by Pelicans. The DDT caused their eggshells to be very thin, thus, they were easily broken when the parents would stand on them. Brown Pelicans have been off the Endangered species list since 1985 and removed from the threatened list in 2009. It is important for us to keep protecting their natural habitats to continue to maintain their populations. We as humans should also be on the lookout for pelicans when we fish. Pelicans thievery can bring them close to our fishing lines and hooks, which we would not want them to become entangled in.

Kathleen McMenamin is a certified Master Naturalist, 50Ton Master Boat Captain, ACA Certified Stand Up Paddle Board Instructor, and US Waterski Certified Ski Instructor. Her love for the outdoors stemmed from growing up on Hilton Head. She has traveled throughout the world, but her passion lies in the South Carolina Lowcountry. She spent her childhood exploring the outdoors, surfing the beaches and paddling the creeks. She has been a guide in the area for over 14 years. She now splits her time between Hilton Head Island and the Blue Ridge Mountains outside of Asheville, North Carolina. She is always exploring, learning all about her natural surroundings, and sharing it with others.

Gaelic Storm is coming to Beaufort for ONE NIGHT only!

Hunting Island reopens this Friday with new hours and rules