Maybe you’ve seen a few Lowcountry gators while golfing or during a walk through the Port Royal Cypress Wetlands trail.They are active year-round, making for complex life in the wild filled with travel, romance, family drama, and of course, naps. It’s a life best explained season by season, so, what are they up to now?

Visitors to the Lowcountry often ask me where do alligators go to hibernate in the winter, but the answer is, they don’t. As reptiles, alligators brumate in the colder months when their environment doesn’t keep them warm enough for activities that require more energy. During brumation, alligators just lie still underwater or in a burrow, they have dug. They won’t eat, as their body won’t be able to digest food, but they will still drink water.

Contrary to the deep sleep of a hibernating mammal, a brumating alligator can enjoy every sunny winter day we get. All of us here have worn shorts in December or gotten sunburned in February, and on those days the gators appear out of nowhere, it seems, to soak up the sun along the banks of their ponds. 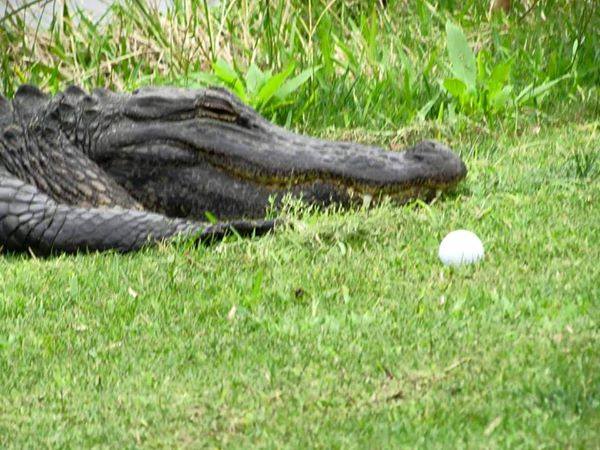 Sometimes it’s better to just leave the ball where it fell. Photo taken on Fripp Island by Kelly Taylor

March 20th may be the first official day of spring, but the signs have been here for a few weeks. Singing birds, warmer air, pollen on your car… you’ve felt it. To me, on Fripp, there’s one more sign of spring: the first gator call. By gator call, I mean some poor alligator was spotted in a strange location and local professionals were called to assess the scene. I happened to be at Port Royal Elementary with some live, baby education gators giving presentations on alligator biology and safety once, and I missed all the action, but the juvenile gator in question this one particular time was safely escorted to a pond where he would be more comfortable. 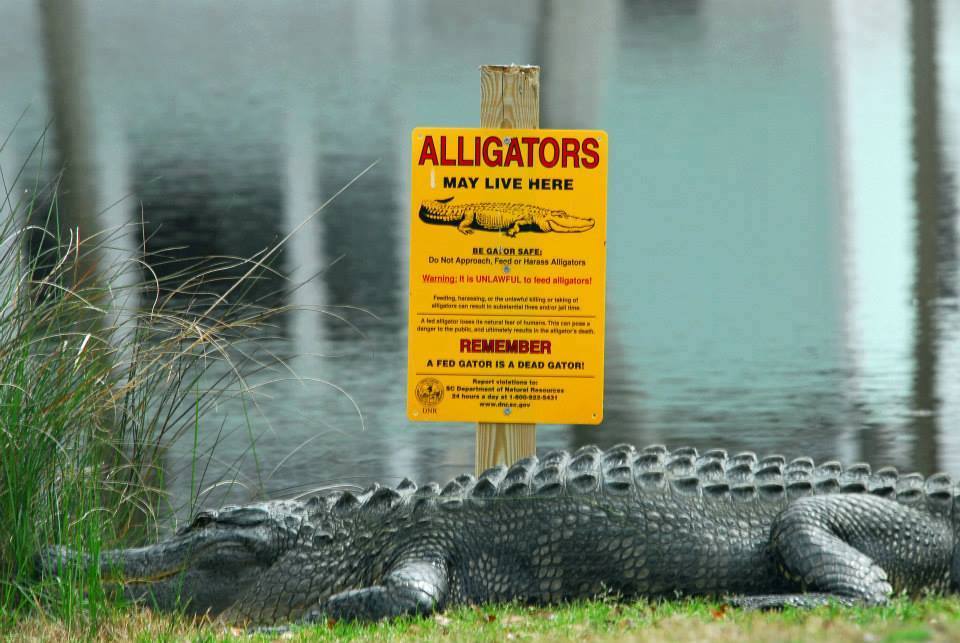 I know what you might be thinking… a roaming alligator? Does that make it a nuisance gator? Should it have been killed? I totally get any feelings of fear that may give you. Alligators are apex predators that can grow to awesome sizes and are known for their ambush style of hunting. However, that ambush hunting method means that if they are out of the water, they are not hunting. They are totally exposed to their potential prey as well as other predators, and they know it. On land, a gator is either basking or traveling. 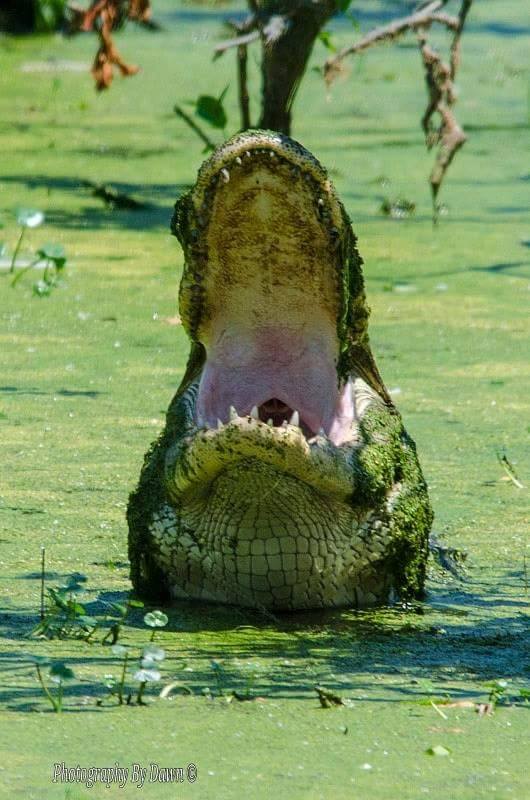 Yep, spring and early summer mean gators are on the move. There’s a particular group of gators that run into trouble as things heat up… the juveniles. We have all heard that mother alligators take great care of their hatchlings, and she will be protective of them for two years or so. After that, they compete with her for food and are a threat to her future babies. She begins to chase them aggressively, and if they stick around she might eat them. The wander years continue until the young gators find their own safe water source not regularly patrolled by a much larger gator.

We rarely encounter wandering gators more than six feet long, but the big ones also have reasons to move around. Territory size depends mostly on food availability, and mating will influence movement as we enter summer. Some of our larger gators walk pond to pond but we almost never see when that move happens. These big gators got big because they are smart. They are secretive and wary of people. They normally choose to walk over land in the middle of the night, undetected.

Alligators of all sizes naturally mind their own business and avoid people. However, if roads, houses, parking lots, and fences have been built in and around their habitat, occasional strange encounters just may happen. No need to expect it or fear it, but as the far smarter species capable of understanding and compassion, we can easily keep ourselves safe and maybe even help. If you see a gator walking on land, stay far back. When approached out of water, gators will hold their ground and become defensive. It’s best to let them continue naturally so they can get to a safe place faster. If a gator is truly stuck somewhere it shouldn’t be or if you feel it is a danger to people, you can call the SCDNR Alligator Complaint Hotline at (803) 625-3569. If the gator is in a gated community that has hired security, give that security office a call first. 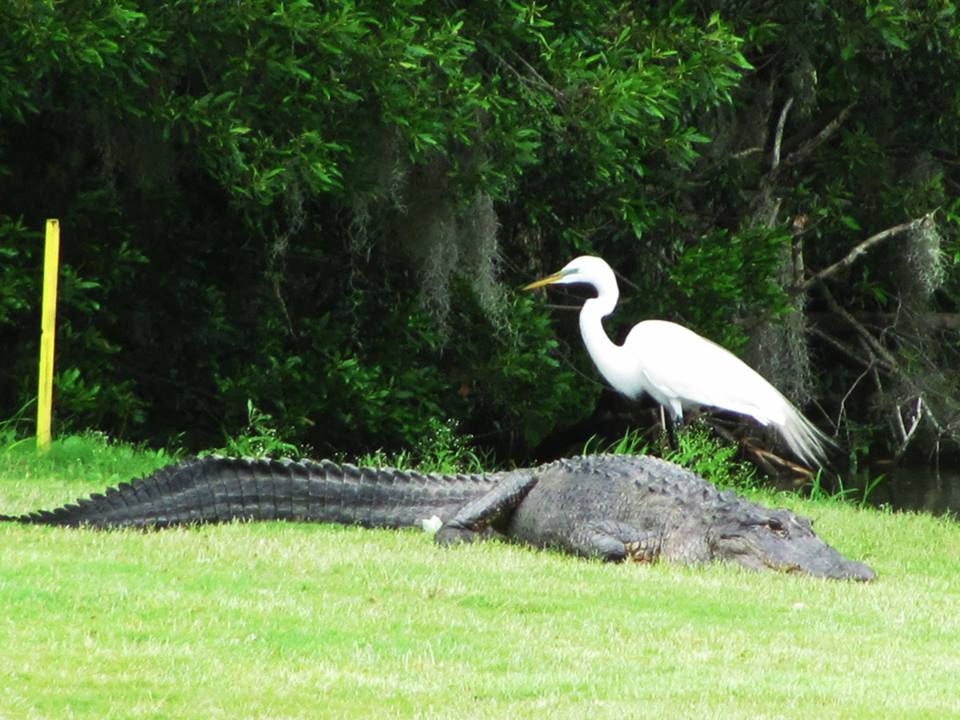 An alligator relaxes in the spring sun near the golf course at Cat Island. Photo by Ginger Wareham

Alligators have good reason to be feared and respected, but they are seriously cool! They are ancient, unique predators that help define southern wetlands. Nuisance alligators are created when they are fed, so never feed an alligator or it may seek out people! Each spring the youngsters will need to wander to find a place to live, and when we realize they are just trying to find a quiet, safe place we can be hospitable Lowcountry neighbors…and let them move along.

For more about being outside in the Lowcountry, visit our column, Outdoors in Beaufort.

Be on the lookout for thousands of Ruby-throated Hummingbirds in Beaufort this March!